Entering the fray of the Crystal Globe Competition on Monday are As Far as I Can Walk from Serbian director Stefan Arsenijević and Boiling Point by Philip Barantini of the UK.

First to take the screen – from 5 p.m. in the Grand Hall – will be As Far as I Can Walk, the story of an African migrant Strahinja and is wife Ababuo, who leave Ghana seeking a better life in Europe. Instead of reaching the western part of the continent, however, they end up in Serbia. Strahinja has started building himself a career, but Ababuo has no way to fulfil her ambitions and her frustration is growing. When she disappears one day, Strahinja sets out to find her.

The second feature-length work by actor and director Philip Barantini Boiling Point takes us to the environs of a luxury restaurant – including behind-the-scenes. This British film with the brilliant Stephen Graham in its main role hurtles forward at the breakneck speed of working in the food industry: the restaurant is overbooked, a disgruntled inspector is poking around the kitchen, and on top of that a culinary icon shows up for dinner with his partner, a respected food critic. KVIFF will unveil Barantini's single-shot wild ride through one hectic evening starting at 8 p.m. in the Grand Hall.

Two movies will have their world premiere in the East of the West Competition today as well. The first will be the debut of Macedonian director Dina Duma Sisterhood at 4 p.m. at the Karlovy Vary Municipal Theatre. It takes place in a community of young people for whom the number of followers on social networks is more important than genuine relationships, while also authentically capturing the formative moments of youth that teach us to take responsibility for our actions.

At 7 p.m., the same place will host the premiere of Czech contender Two Ships, a romance with Eliška Křenková and Martin E. Kyšperský in the main roles. This lyrical work from director Jan Foukal contemplates how deeply we can know another human being and whether love alone is enough. 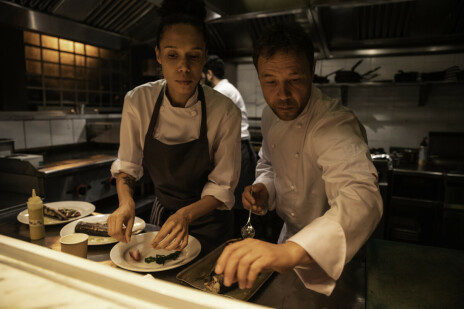