Today's offering of accompanying events at the 55th KVIFF is once again rich. For instance, you can attend one of the film discussions. There are four taking place today:

The first will be a talk on the film Cesta domů at Czech Television House. Two hours later, at 1 p.m., there will be a discussion at the same place about the work Intensive Life Unit, which is competing here at the festival in the section East of the West. Starting at 3 p.m. there will be another discussion on Cesta domů, but this time at the innogy point on the Mill Colonnade. Lastly, at 3 p.m. at Czech Television House, the "Tea at Three" will be about Saving One Who Was Dead by director Václav Kadrnka, which is being shown in the Crystal Globe Competition at the 55th KVIFF.

At 2 p.m. another in the series of KVIFF Talks will take place in Hotel Thermal's Press Conference Hall, this time with DJ & producer Laurent Garnier. He has come to Vary to present the documentary Laurent Garnier: Off the Record, which maps out both Garnier's life and the history of and his revolutionary contribution to electronic music. Moderating will be Saša Michailidis. The KVIFF Talk will take place in English without translation.

At 4 p.m. at the Municipal Theatre, Jan Svěrák will introduce his work The Ride, which received the Crystal Globe for Best Film at the 30th KVIFF in 1995. This year, Jan Svěrák will be receiving the KVIFF President's Award, which the Karlovy Vary festival awards every year to a domestic filmmaker.

Šimon Šafránek's new documentary web series RapStory will be presented at 7 p.m. at the Congress Hall. In addition to the director, screenwriter Karel Veselý and one of the protagonists Smack will also be at the screening.

At 7:30 p.m., the third of four audio-visually captivating evenings will start at the KAISER 55 pop-up club at the Postal Court (Poštovní dvůr). PSH & Maniak will play outdoors, to be followed by an after party just like on the other days.

The festival's rich accompanying programme will also be continuing. Find more information on it here. 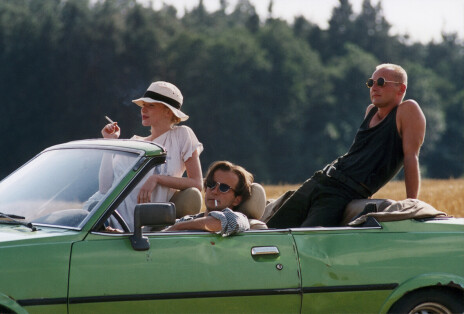