We are halfway through the festival, but we can look on the bright side: we are only halfway through the festival! This means that more premieres of the competition films and their accompanying delegations are to come. The gala premiere of the documentary Provincial Hospital takes place at 5:00 p.m. and the drama A Far Shore premieres at 8:00 p.m., both at the Grand Hall. The Proxima Competition will present the film In Broad Daylight at 3:30 p.m. at the Karlovy Vary Theatre and the family drama Like a Fish on the Moon at 7 p.m. at the same venue.

You can meet the authors of the Czech comedy Big Opening on two occasions. The delegation will officially present the film at 11:00 a.m. at the Grand Hall and then hold a discussion at 5:00 p.m. at the Czech Television House. The star Geoffrey Rush will come before the KVIFF audience for the first time to introduce the Oscar-winning film The King's Speech at the Grand Hall at 2:00 p.m.

Even before that, we would like to invite you to the KVIFF Talk with ​Molly Malene Stensgaard from 11:30 a.m.. Lars von Trier's court editor worked on eight of his films, starting with Idiots, Dancing in the Dark, Dogville, Melancholia, Nymphomaniac and Jack Builds a House. The interview will be moderated by festival dramaturge Louise H. Johansen. The KVIFF Talk will take place in English without translation in the Press Conference Hall of the Thermal Hotel.

The film Where an Alibi Is Not Everything brings a reminiscence of the Czech star Oldřich Nový at the Small Hall at 12:00 p.m. The screening will be followed by a launch of the book ‘THAT WAS HIM: Kristian dressed in overalls’ by Šárka Gmiterková, with whom you can talk about the iconic actor. Gmiterková will also be covering this topic in KVIFF Talk at 1:40 p.m.
​
The KVIFF.TV Park will again host meetings with the authors of the competition films. At Meet & Greet, you can talk to the authors of the film America from 1:15 p.m. and the author of Silence 6-9 from 4:00 p.m.

The Cinema Without Barriers project will be presented at Mlýnská kolonáda at 3:00 p.m., with a performance by disabled dancers. The project provides assistance services to disabled film fans so that they can enjoy the atmosphere as comfortably as possible. It has been available at KVIFF since 2000. This time, visitors will see an impressive selection of classical and modern dances. The concert of Pavel Callta offers another break from watching films, beginning at 7:00 p.m. at Mattoni Life Bar by Vřídlo.

A complete overview of the festival’s accompanying programme can be found here. 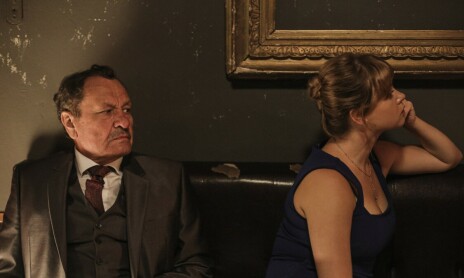