In his film The Dam, Lebanese director Ali Cherri connects the history and geography of the Arab world with water, earth and fire. “I focus on the elements to highlight socio-economic problems,” he revealed after the screening at the Drahomíra Cinema. “I’m fascinated by the idea of the mixture from which a person emerges. The biblical Adam, the Jewish golem and the Sumerian Gilgamesh are all connected via the theme of clay.”

The story of a Sudanese man who builds a mysterious sculpture in the desert out of his own frustration, while demonstrations against the dictator in distant Khartoum take place, also reflects Islamic mythology. “The protagonist is fighting evil. Like other mythological heroes, he has to fight off desert spirits to emerge victorious,” the director said. It was because of the civil unrest in Sudan that the filming had to be temporarily suspended.

The name refers to the Merowe Dam, one of the most destructive projects in the region. “Its construction has not only led to fundamental changes in the climate, but also to the forced resettlement of the local population,” Ali Cherri told during the discussion with the audience. 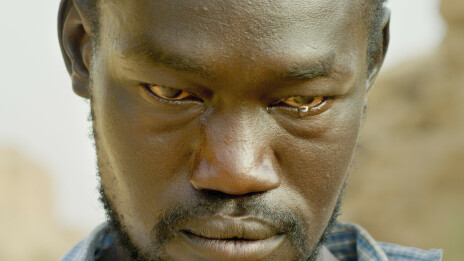