The KVIFF Grand Prix – Crystal Globe – goes to Summer with Hope directed by Sadaf Foroughi, an Iranian-Canadian social drama about an alliance between the two young men fighting the power of authorities and disapproval from the people around them. "We live in a world full of violence and discrimination. I hope that our stories bring peace and tranquility," said clearly moved director Sadaf Foroughi to the jury and her colleagues. The Special Jury Prize goes to Spanish film You Have to Come and See It directed by Jonás Trueba, which conveys profound, existential feelings in a cinematic miniature.

The Czech film The Word won two awards at KVIFF. Beata Parkanová and Martin Finger received the Best Director Award and the Best Actor Award, respectively. The suggestive and concentrated narration of the fateful events in 1968 follows a stubborn notary whose moral principles prove an issue for his entire family during the turbulent times. Finger thanked the audience for their positive reactions, while Parkanová recalled that the only prize she had ever won was a contest in eating dry bread-roll as a child.

Two Best Actress Awards were presented, both from actresses in the Georgian film A Room of My Own. Mariam Khundadze and Taki Mumladze, who also co-wrote the screenplay, portray a duo of millennials who struggle with prejudice in contemporary Tbilisi. Both actresses were overwhelmed with emotions during their speech. To top it off, it was Mumladze’s birthday today. Led by the film’s director, Ioseb Bliadze, the audience thus sang "Happy Birthday to You", just like to Geoffrey Rush a few days earlier.

The Proxima Jury Award goes to a Czech documentary

The first ever winner of the new Proxima festival competition is the documentary Art Talent Show directed by Adela Komrzý and Tomáš Bojar, about talent exams to the Academy of Fine Arts. Among others, the two authors thanked the Academy of Fine Arts for opening their premises for them instead of being privative as most other institutions.

The Proxima Special Jury Prize goes to the Spanish-Argentine film La Pietà. The statuette was accepted by director Eduardo Casanova, who then dedicated the film to all those who seek freedom in all its forms. The visually gripping film about a toxic relationship between the mother and son is very personal for the author. The last award in the Proxima competition goes to the Croatian-Serbian film The Uncle directed by David Kapac and Andrija Mardesic. The unnerving debut balancing on the edge of grotesque and thriller received the Proxima Jury Special Mention.

The documentary about a rap band PSH Neverending Story was selected as the winner of the Právo Audience Award. "This film is basically about friendship and the capability of staying together even though each of us is different," director Štěpán FOK Vodrážka summed up the message of the KVIFF’s most popular film.

At the end of the Closing Ceremony, Jiří Bartoška, the KVIFF’s President, officially closed this year’s festival and invited visitors to the 57th KVIFF, to be held from 30 June to 8 July 2023. 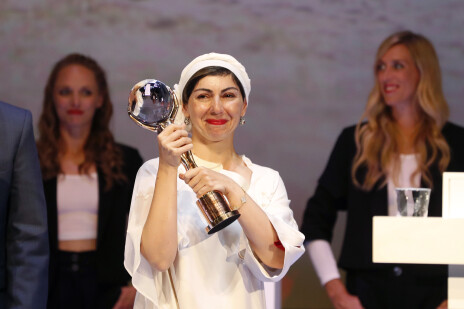