The weekend is definitely not the end of the festival, quite the opposite – Monday will bring more films included in the competitions as well as a lot of other events. In the Crystal Globe Competition is screened the film A Room of My Own, about the life perspectives of young girls in contemporary Georgia. The film will be presented from 5:00 p.m. at the Grand Hall. At the same place, from 8:00 p.m., starts the screening of the second Czech film included in the Crystal Globe Competition - a bold relationship drama The Borders of Love.

Proxima, the second competition section, will present the Balkan documentary Another Spring and the Polish co-production family drama Fools. The screenings take place at the Karlovy Vary Municipal Theatre at 4:00 p.m. and 7:00 p.m., respectively.

Monday further offers the possibility to meet several other delegations. The authors of June Zero will present this thrilling recollection of the Adolf Eichmann trial at 2 p.m. at the Grand Hall, and the delegation of Rubikon, a pure science fiction film, will arrive in the Small Hall at 9:00 p.m.

The Meet & Greet event at the KVIFF.TV Park offers discussions with the creators of the two films included in the Crystal Globe Competition that were screened on Sunday. The authors of The Ordinaries will talk about their film from 2:00 a.m. and the creators of the Czech film The Word at 6:00 p.m., both at the same place.

If you need a break from films, you can attend for example Thom Artway’s concert at the Rohlík Zone in Smetanovy Sady at 8 p.m. A complete overview of the festival’s accompanying programme can be found here. 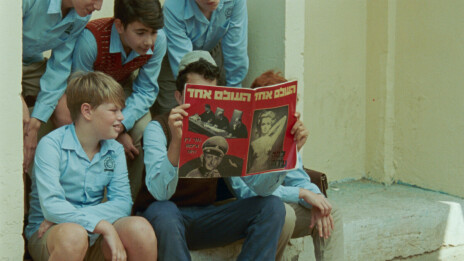