The Father, an intimate family drama about the difficulties of connecting with those close to us, told through thoroughly conceived absurd or comic situations, is the winner of the Main Competition at the 54th Karlovy Vary International Film Festival. The Bulgarian directing duo Kristina Grozeva and Petar Valchanov, also known for their films The Lesson and Glory, accepted the Crystal Globe.

The jury composed of Štěpán Hulík, Annemarie Jacir, Sergei Loznitsa, Angeliki Papoulia and Charles Tesson presented the Special Jury Prize to the German drama Lara. This precisely crafted psychological study directed by Jan-Ole Gerster also brought the Best Actress Award to Corinna Harfouch for her portrait of the authoritative mother. The German star received the same prize at the Karlovy Vary Festival in 1988.

Milan Ondrík was granted the Best Actor Award by the jury for his performance in the Czech-Slovak drama Let There Be Light directed by Marko Škop, narrating a story of a village man working in Germany who returns home for Christmas and learns that his son, a member of a paramilitary youth organisation, might be involved in a harrowing event that stunned the local community. Tim Mielants from Belgium was announced as the Best Director for his tragicomedy Patrick, which takes place at a nudist campsite.

The main jury further awarded two Special Mentions, one to the Spanish film The August Virgin, and the other to a talented rising actress Antonia Giesen for her role in the film The Man of the Future.

The East of the West section winner is The Bull, a taut feature debut by one-time ballet dancer Boris Akopov. The Special Jury Prize went to a Ukrainian colourful road movie about a sound engineer My Thoughts are Silent. The Grand Prix for Best Documentary Film went to Ksenia Okhapkina's essay Immortal, portraying the life in a small Russian industrial town governed by strict rules. The Documentary Special Jury Prize was awarded to Confucian Dream, a story of a Chinese mother looking for the right kind of alternative upbringing for her son. Another documentary film, Olga Sommerová's portrait Jiří Suchý - Tackling Life with Ease, won the Právo Audience Award.

This year's Crystal Globes for Outstanding Artistic Contribution to World Cinema were awarded to two American actresses, to Julianne Moore at the Gala Opening and to Patricia Clarkson at the Closing Ceremony. "I have received this beautiful award. Karlovy Vary have energised my soul, and I do not want to leave, just wish to send for my dog and stay here," commended the actress. "I believe that you are never alone to win an award, but rather supported by numerous outstanding artists I have had the
honour to work with. I have met many wonderful people here, too, and hope I see you again," she concluded.

Jiří Bartoška presented the Festival President’s Award to cinematographer Vladimír Smutný. "A cinematographer's place is behind the camera and only rarely in front of it. I am grateful to Jiří Bartoška for giving me this exceptional opportunity and for awarding me this prize, which is hard to get as a cameraman. I truly prize this prize, which indeed is heavy," thanked Smutný. 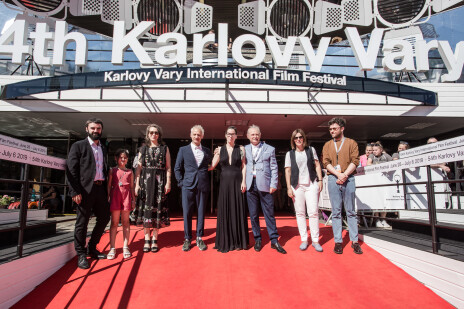