News Spring at the movies with films from the 55th KVIFF

An unusual romantic comedy that captivated audiences at numerous festivals, including Karlovy Vary, or a sensitive story of understanding and forgiving that is an unexpected Oscar favorite. The spring programs of Czech cinemas feature more hits from the 55th KVIFF.

On 17 March, The Worst Person in the World – a fresh and inventive reminder that sometimes you’re still not entirely an adult at thirty – comes to Czech cinemas. The most successful Norwegian film of recent years won an award at Cannes for actress Renate Reinsve’s multilayered performance, and since then it has gone on to earn two nominations for the European Film Awards and two for the Oscars. Plus, it has enchanted thousands of viewers. KVIFF showed the film in its Horizons section, and at the Vary at You Cinema mini-festival, our artistic director Karel Och did a video interview with director Joachim Trier.

An Oscar-nominated ride according to Murakami

A week later, Czech cinemas welcome the quadruple Oscar nominee Drive My Car. With his sensitive adaptation of Haruki Murakami’s story about the friendship between a theater director and his driver, Japanese director Ryusuke Hamaguchi has created a favorite for the Oscar for Best International Feature Film. The film was also nominated for Best Film, Best Director, and Best Adapted Screenplay. It, too, won its first award at Cannes and later captivated audiences in Karlovy Vary, where it was shown in the Horizons section. Drive My Car and The Worst Person in the World are both being brought to Czech cinemas by Aerofilms, a subsidiary of the KVIFF Group.

Also thanks to Aerofilms, the latest by Czech documentary filmmaker Helena Třeštíková, René – The Prisoner of Freedom, is coming to Czech cinemas on 7 April. The film, which was shown as a pre-premiere at our autumn mini-festival Vary at Your Cinema with the participation of the filmmaking team, is a sequel to the rawly authentic documentary portrait René (2008). Like its predecessor, it looks at the life of its main protagonist, an irredeemable delinquent and sharp social commentator.

The latest from promising guests of KVIFF

Now playing at Czech cinemas is the entertaining and touching road movie Hit the Road, in which Panah Panahi, a guest of the 55th KVIFF, shows that he inherited a talent for filmmaking from his father, the well-known Iranian director Jafar Panahi. Late March saw the cinematic premiere of another distinctive film from Cannes, Olga – the gripping and now unfortunately very topical tale of a fifteen-year-old gymnast who must choose between her career and her mother, who is protesting on Maidan. Director Elie Grappe was on hand for its debut in Karlovy Vary.

And if that’s not enough, you can also catch up on or rewatch the biggest hit of last year’s Karlovy Vary competition, the gastro-drama Boiling Point, which earned actress Vinette Robinson a Special Mention. Or you can see the opening film of the 55th KVIFF, the winner of the Právo Audience Award and the recent recipient of eight Czech Lion Awards, Zátopek. Or check out Intensive Life Unit, which took home Special mention in the East of the West competition and was voted best documentary film by both the Czech Film and Television Academy and the Association of Czech Film Critics. 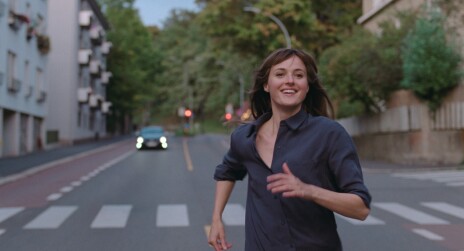